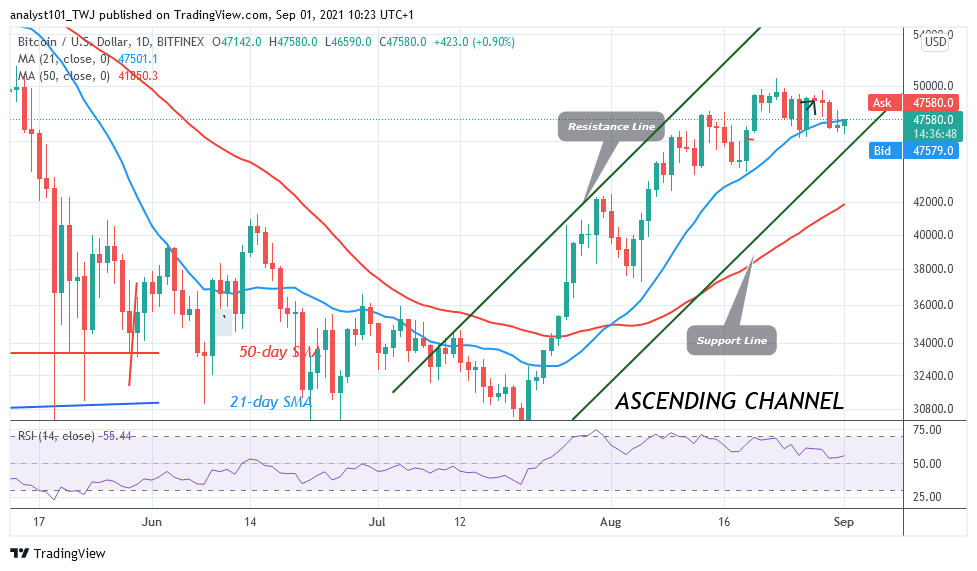 
Bitcoin Surges Ahead as It Reaches a Striking Distance – August 31, 2021

Today, Bitcoin price rallied to the $49,100 high but was repelled as it reaches a striking distance. The crypto slumped to the $48,200 support as bulls buy the dips. The coin corrected upward but faced another rejection. It is a common saying that the bulls buy the dips while the bears sell the rallies. The recent retest at the $50,000 overhead resistance will be possible if the BTC/USD price holds above the $48,000 support

On September 1, the retracement above the $48,300 was held as bulls resumed the upside momentum. The bulls have broken above the $49,500 resistance. The bullish momentum is sustained above the recent high as bulls contemplate retesting the $50,000 psychological price level. Presently, BTC’s price is struggling below the $49,900 resistance. Bitcoin has reached a striking distance above the $50,000 psychological price level. A break above the $49,900 will catapult Bitcoin to rally to $55,000 high. The Relative Strength index period 14 is at level 60. It indicates that Bitcoin is in the bullish trend zone and capable of rallying on the upside.

Nevertheless, the BTC price is retracing after reaching the high of $49,900 as it reaches a striking distance. The current upside momentum will resume if the BTC price falls and finds support above the $48,000 support. If the bears break below the $48,000 support, the selling pressures will resume. Bitcoin has fallen to the low of $49,397 at the time of writing. There is a likelihood of further downsides.