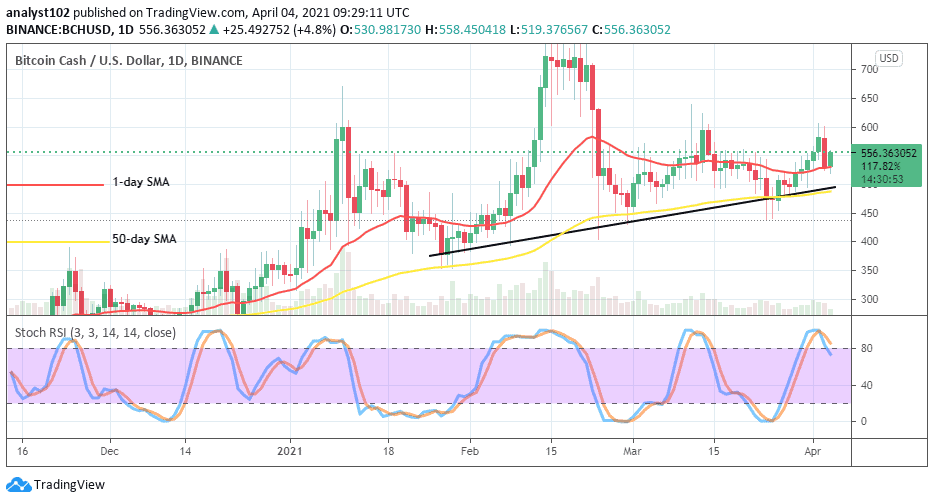 
BCH Price Prediction – April 4
There have been on record that the BCHUSD market valuation has witnessed notable rejections around the main resistance point of $650 in the recent past and, about two trading days’ session. The crypto now shows a sign of re-approaching towards the trading resistance line as of writing.

BCH/USD – Daily Chart
It is depicted on the BCH/USD trading chart that a vital resistance has located around the level of $600. The $800 high value remains the higher point ever achieved since the current start of the general bullish run in the world of crypto-economies trading. The bullish trend-line and the 50-day SMA trading indicator have closely located below the trading price to keep the suggestion of buying outlook. The 14-day SMA is yet located over the bigger SMA. The Stochastic Oscillators have moved into the overbought region to cross the hairs as they briefly point to the south at range 80. That signifies a relaxation in the BCH/USD market’s moving efforts to the north.

Will BCH/USD market prolongs trading below the $600 resistance level?
There has been a strong indication that the degree of BCH/USD bulls striving efforts currently is on a less active moving mode to suggest a safe trading position beyond the $600 resistance line. That having said, only a big fully formed bullish candlestick at that point will potentially allow a better stride of the bulls’ run in the crypto-economy trading operations.

On the flip side, it has been depicted that the critical trading line against the further upswing of the BCH/USD trade is around the $600 level. Therefore, the bears may have to consider making use of any possible rejection at that zone to launch an entry. However, sellers should be wary of getting too late in the market as it could eventually lead to a gradual loss of momentum to the market’s upside move in the long run.

BCH/BTC Price Analysis
Looking against the market-weight between the Bitcoin Cash and Bitcoin, the crypto-base looks like struggling to push against the counter-crypto’s value from a lowly level presently. The two SMA trend-lines are positioned tensely pointing towards the south with a notable space between them. The 50-day SMA is over the 14-day SMA. The Stochastic Oscillators have moved into the overbought region to cross the hairs within it. From the technical trading approach, BCH still appears not to be regaining quickly from the pressures inflicted on BTC.