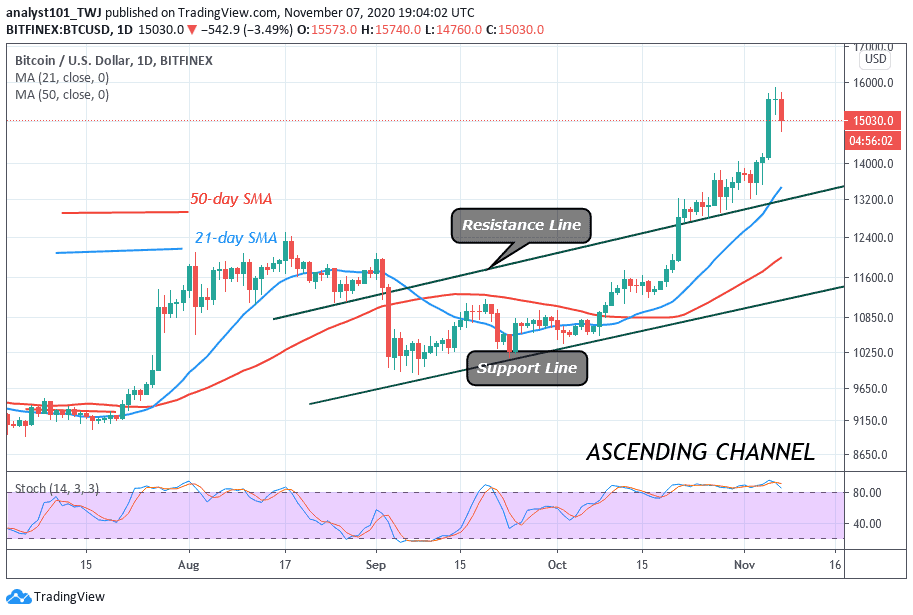 Since October 21, Bitcoin’s price has been in upside momentum after a successful breaching of the resistance levels. On November 5, Bitcoin traded and reached a high of $15,888. Nevertheless, for the past two days, BTC has been in a sideways trend. The coin now fluctuates between $15,400 and $15,888. The bulls have been finding penetration difficult at the recent high. Possibly, there is a likelihood of a further upward move if a breakout occurs at the $15,888 resistance.

A breakout will push BTC to a high of $16,500. Conversely, the bears have not been able to break below the $15,400 low. A breakdown will make BTC fall to the next support at $14,950. Meanwhile, Bitcoin has been trading in the overbought region since October 15. BTC has been trending higher despite the overbought condition of the market. Sellers may emerge if Bitcoin shows signs of weakness.

Chair Jerome Powell’s Latest Comment Is a “Code for Buy Bitcoin”
On November 5 Fed’s meeting on the state of the economy and a future measure, Powell was addressing a news conference. He said Congress should agree to a further fiscal stimulus as U.S. public debt reached $27.2 trillion. The United States Federal Reserve is inadvertently marketing Bitcoin, as Chair Jerome Powell suggests for more money printing. Tyler Winklevoss, in a tweet on Nov. 6, reacted that Powell’s latest speech this week was a “code for buy Bitcoin.”