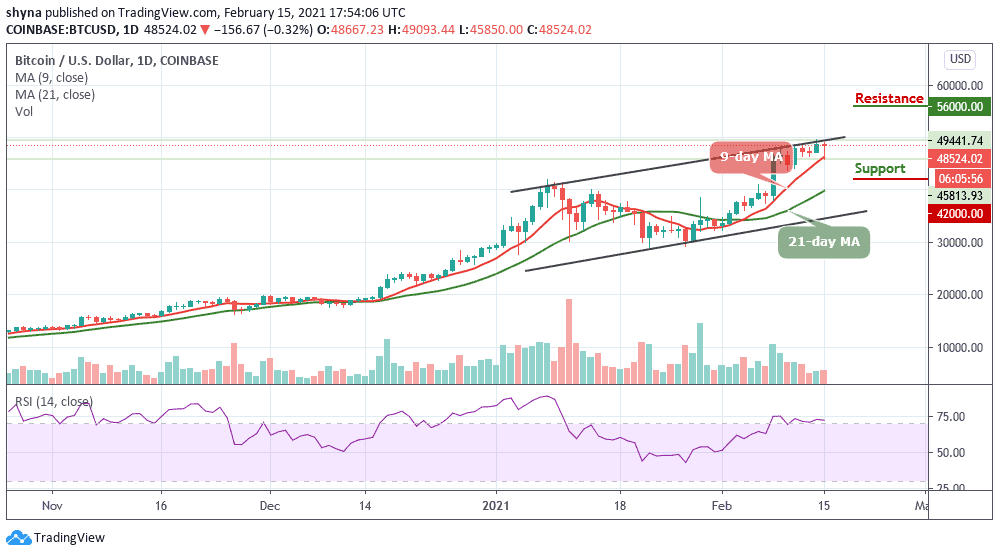 BTC/USD begins the day with a downside movement as the coin touched the daily low of $45,850 in the early hours of today, but later, the Bitcoin price is now seen improving and moving out of the downside to the upside as the market remains above the 9-day and 21-day moving averages. More so, since the beginning of this month, BTC/USD has moved up from $33,137 to $49,093 and now changing hands at $48,524.

Where is BTC Price Going Next?

BTC/USD is making an attempt to climb higher above the $50,000 resistance as the technical indicator RSI (14) remains within the overbought region. In the next positive movements, if the new bullish movements are beginning to form, buyers could use the 9-day moving average as the nearest support level. But in as much as the red-line of 9-day MA stays above the green-line of 21-day MA, the market price will remain in the upward movement.

According to the 4-hour chart, Bitcoin’s price is currently trading around $48,549 as the coin moves around the 9-day moving averages after touching the daily high of $49,403. Meanwhile, we can see that the bullish movement is still very intact in the market as the bears are also trying to bring the price down.

However, if the buyers could put more pressure, they can further push the price to a $54,000 resistance level. Therefore, breaking the mentioned resistance may allow the bulls to test the $56,000 and above. Meanwhile, the RSI (14) is currently moving above the 75-level, but any movement below this barrier may welcome the sellers into the market and could lead to the support of $42,000 and below.