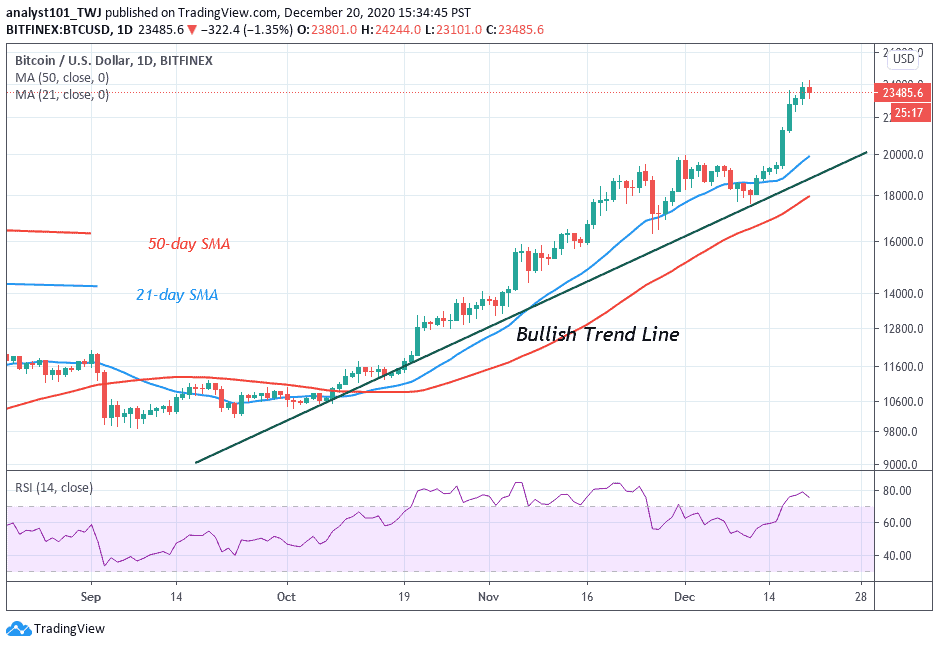 
Bitcoin (BTC) Price Prediction – December 20, 2020
On December 16, following the breakout above the psychological price level of $20,000, the market has been continuing. The breakout propels the price to reach a new high of $24,000. Conversely, if the bulls have failed to break the $20,000 resistance, the coin will suffer a bearish reaction. The coin will have a deeper correction.

The breakout on December 16 has signaled the resumption of the bull market. The bulls have also sustained the uptrend as there could have been a major selloff as Bitcoin tested the $24,000 resistance. During the weekend the price rose to $24,200 and pulled back. Nonetheless, in the past five days, BTC/USD has been trading marginally. There has been no significant price movement. The king coin has been fluctuating between $23,200 and $24,000. Meanwhile, Bitcoin is still trading above the 80% range of the daily stochastic indicating that the coin is in a strong bullish momentum.

Bitcoin price is trading and has reached $23,928 at the time of writing. The price may retest or break the $24,000 resistance. In the previous price action, BTC reached a high of $24,200 and pulled back. Meanwhile, if the recent high is convincingly broken and the bullish momentum is sustained the crypto is expected to reach the $25,000 mark.