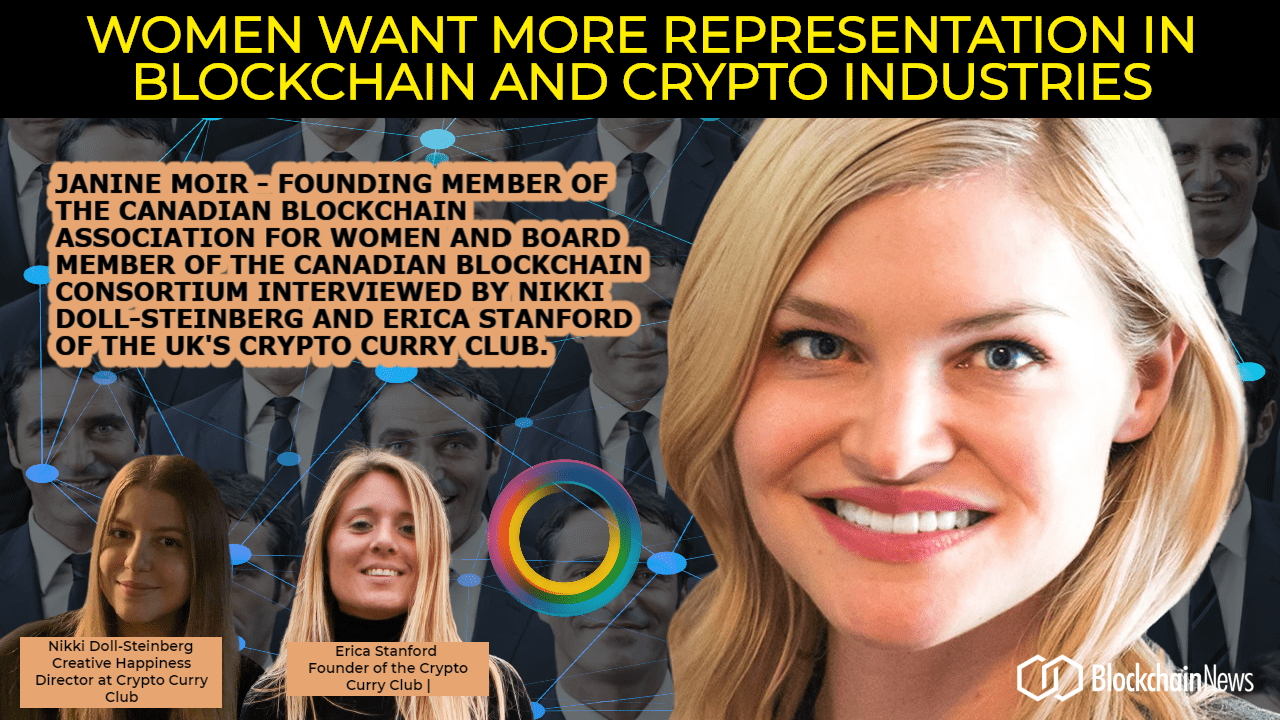 
The Blockchain and Cryptocurrency sectors are notorious for being some of the world’s most terrible industries for female representation.

If you think a mere five per cent of people working in blockchain are women in the UK is bad, in Canada it drops to three per cent.

Globally, statistics pick up slightly with women making up nine per cent of active participants along with eight and a half per cent of start-ups having a female founder or-founder.

This is according to an extensive report on the dire lack of women in the Blockchain and Cryptocurrency sectors from the UK’s Crypto Curry Club, they note that even UNICEF, an organisation known for striving for gender diversity and with a staﬀ comprising of 70% women, could only count just one female founder in the six blockchain start-ups their Innovation Unit funded.

The Crypto Curry Club runs some of the most popular and best-attended events in the UK on blockchain and cryptocurrency and is regularly congratulated for their attendees comprising of 20-30 per cent women – very rare for a male-dominated industry.

In the UK, the Crypto Curry Club did some extensive research into the blockchain ecosystem. Of the topmost active 100 blockchains and crypto pre-series A start-ups, only 19 per cent had a female founder. In most cases, this was not the only founder, but one of several co-founders.

On the cryptocurrency trading side only seven to nine per cent of crypto users, traders and investors are women. And in 2017, only $5 billion out of some $85 billion (5.88 per cent, was obtained by women.

The UK’s Crypto Curry Club spent six months talking to the top 100 women leading some of the most exciting blockchain projects and initiatives from start-ups to enterprises around the world in the following report. The 101 women are in no particular order other than the industry sector!

The key findings from the 2020 Top 101 Women in Blockchain Report according to the authors were:

Nikki Doll-Steinberg, the Creative Happiness Director at Crypto Curry Club, Neuroscientist and Tech Marketer interviewed one of the 101 women in the report, Janine Moir, and plan to interview all of them over the coming months on Linkedin with Erica Stanford, the Founder of the Crypto Curry Club.

From the Linkedin Interview by Nikki Doll-Steinberg and Erica Stanford:

How did you hear about blockchain and what led you to start focusing on blockchain in your work?

In a word: science-fiction. I’m an avid sci-fi reader and when I first heard about bitcoin, I thought to myself “Ah, here we go. Science fiction is becoming science fact.” For example, the Kindle is based on a science fiction story! Companies today are hiring sci-fi writers to think of new ways to use their products or to innovate. This translated into my work life as I looked forward to where I saw the future of the accounting profession. I knew it was something I needed to be involved with. At that point, I started talking to anyone who would listen to me about why they should care about blockchain and what it means for audit and finance teams.

If anyone is looking to start or find work in blockchain, what advice would you give them?

Be really curious. Get educated. There are a lot of sources of information out there that are confusing or inaccurate. Ask around from people who have received blockchain training and ask them who has provided the best learning experience. LinkedIn has been an awesome source of information for me from credible people and organisations.

Are there any skills or courses you’d recommend anyone to take who might want a role such as yours?

The accounting bodies are starting to offer some blockchain content which is an important step. See what your local CPA/CA institute is offering. If they aren’t offering anything, ask them why, and try and get a course available! Blockchain is super critical to the future of audit and assurance.

What is the most exciting part for you of working in blockchain and innovation?

Just that – it’s exciting! New people, new ideas, passion! I love my job because I get to have all of those things in it. I also meet incredibly smart people who are constantly expanding my horizons.

What would you recommend anyone to do who wants to raise the profile of and grow the adoption of emerging tech in any geographical area?

Check out who your local groups are that may already exist. For example, I am on the board of the Canadian Blockchain Consortium. We started provincially through various meet-up and interest groups. The demand was so strong for our blockchain offerings and knowledge we went national very quickly. Having a central place that many in the community rely on helps bring together all the voices needed to give more depth and weight to conversations.

If there is nothing local like this for you – why don’t you start it? It won’t be easy, but it will be rewarding.

Can you tell us more about #movethedial?

#movethedial is an amazing organization. They are raising awareness and bringing so much attention to the dearth of women in tech. From hearing stories of how women transitioned into tech careers to working with companies on their diversity and inclusion initiatives #movethedial is making waves across the world. Look up Jodi Kovitz if you don’t know her. She is changing the world! As she says, “the dial doesn’t move”! We all have a part to play to accelerate women in technology.

What do you feel needs to happen to get more women and a more diverse set of people working in tech? What difference do you think it would make to business and the economy (and even happiness within companies) if there were more women working in tech and in senior roles?

There is clear data that companies provide better returns when more women are on boards and making decisions. I don’t see how it’s possible to make the best choices without a diversity of thought at the table. If everyone in the room looks and thinks the same how is it possible to come up with the best answer? The data is crystal clear on these points, but it continues to be a struggle to make changes. Women in leadership in tech are far lower than overall women in leadership numbers. There’s a lot we need to do.

Clearly, there is a massive lack of women engaging in Blockchain and Cryptocurrency and the Crypto Curry Club is working hard to publicize and spread the facts, to facilitate change and engage more women to enter the industries. And push companies to hire more women to create a more representative ratio than single-digit percentages of women in the industries.