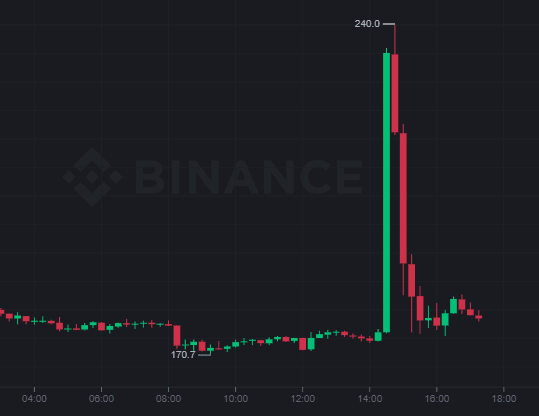 
A fake press release on a little-known website GlobeNewsWire today claimed that retail giant Walmart was set to partner with Litecoin and accept cryptocurrency payments.

Mainstream news media such as CNBC ran with the fake news story, posting viral tweets which saw the Litecoin price pump 33% from $180 to $240 within minutes, only to then crash.

Expert crypto investors on Twitter were quick to point out that not everything was as it seemed with the announcement – some of the citations on the fake news story led to non-existent websites, the Litecoin Twitter @Litecoin account itself had quickly deleted their own Tweet, and the Walmart website had no information on the partnership deal.

A smaller Litecoin Twitter account @LTCFoundation then clarified that in fact no partnership with Walmart had been struck.

The Litecoin Foundation has not entered into a partnership with Walmart.

It isn’t clear why the official Litecoin Twitter profile tweeted out the fake news to its 760k followers. Or why news media outlets such as CNBC and Reuters wrote up articles without fact-checking the sources.

Some news sources even wrote fake quotes from the Walmart CEO, causing some of the more conspiratorially minded traders to ask if this was a planned ‘pump and dump’.

After a weekend of already volatile trading, this fake news rocked confidence in the cryptocurrency markets and Bitcoin dropped to a low of almost $43,000, the market rally selling off instantly once it became clear no Walmart partnership would be confirmed.

Some low marketcap altcoins however have already shrugged off the panic and FUD and continued their bullish uptrend.

Buying the dip on Bitcoin and then using BTC to buy and hold alts for the long-term may pay off in the remainder of 2021. Bitcoin dominance has been steadily declining.

Tezos (XTZ) for example has already recovered the dip and set a new six-month high against USDT, at almost $8.

You can buy Tezos on Binance and eToro.

Another similarly strong coin is Polkadot (DOT) which is currently trading over $36, almost at back the weekend high of $38. Read our guide on how to buy Polkadot.

67% of retail investors lose money when trading CFDs with this provider.