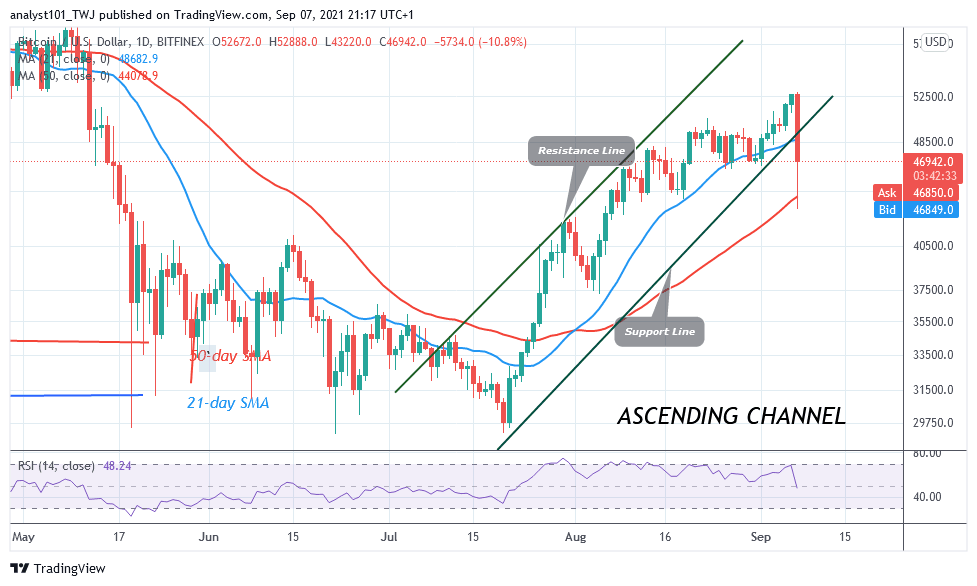 
Bitcoin Pauses above $46K as It Resumes Downward Correction – September 7, 2021

On September 5, BTC price retraced to $49,693 support as it resumes downward correction. BTC/USD rebounded above the current support as bulls broke the resistance at $50,200. Bitcoin rallied to $51,900 high but the uptrend was stalled below the $52,000 resistance zone. After two days of fluctuation below the resistance zone, the bulls broke above the $52,000 high. Today, BTC’s price has plunged to the previous low at $43,220.

Following the breakout above the $52,000 high, buyers are set to push Bitcoin to the high of $55,000. In previous price action, the bulls broke above the $50,000 high but have not been able to sustain the bullish momentum above it. There have been several false breakouts above the psychological price level. Nonetheless, for the past 48 hours, the BTC price has been holding above the psychological price level. This price action is indicating a possible resumption of the uptrend.

In the meantime, BTC/USD is approaching the overbought region of the market. The uptrend is facing some resistance on the upside as Bitcoin falls. The bull will attempt to resume the uptrend after the retracement. Today, BTC price has fallen to the low of $46,162 at the time of writing. The downward correction has resumed as Bitcoin falls below $50,600 support. The RSI has fallen to level 46 indicating that Bitcoin is in the downtrend zone and capable of falling on the downside.

El Salvador Makes Purchase of 200 BTC Ahead of September 7

Nayib Bukele is the President of El Salvador who has confirmed that his government has purchased its first 200 Bitcoin (BTC). The 200 BTC purchase is part of a new $150 million Bitcoin fund voted for by El -Salvador’s Congress. The purpose is to facilitate conversions from BTC to United States dollars in the lead-up to the new law being implemented. Presently, the BTC purchase was worth over $10.36 million. This is in preparation for the September 7 rollout of a new law set to make the cryptocurrency legal tender. Today, El Salvador will be the first country in the world to recognize Bitcoin as legal tender. The government took this decision against opposition from local groups. The government believes that cryptocurrency will make a net positive for the economy and society.

Today, BTC’s price rallied to a high of $52,888 but faces rejection at the recent high. Presently, BTC price has fallen to the low of $43,220 as bulls bought the dips. It has corrected upward to $47,112 high as the crypto resumed consolidation above current support. Today, the candlestick is indicating a long bearish tail. The long tail indicates that there is strong buying pressure below the current support.