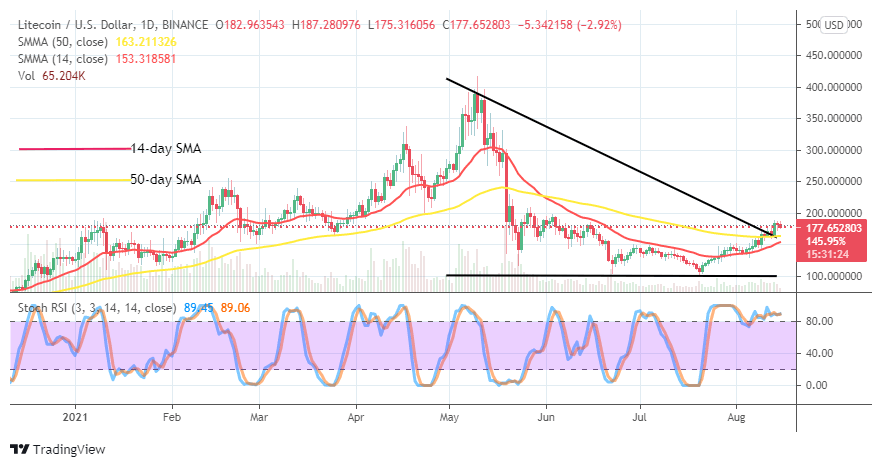 LTC/USD – Daily Chart
The LTC/USD daily chart reveals it now that the crypto market faces resistance near below the value of $200. A notable bullish candlestick emerged on August 13th trading session, propelling the crypto’s valuation closely to the immediate resistance trading line. The following days’ sessions have been witnessing a difficult trading situation by featuring less active price movement around $180 until the present. The bearish trend-line drew southward to touch the 50-day SMA indicator on the buy signal side as the 14-day SMA indicator curves slightly northward near below the bigger SMA. The Stochastic Oscillators are still somewhat erratically consolidating in the overbought region.

What could be the next directional movement as the LTC/USD market faces resistance at a higher point?

It appears that different trading activities may still feature in the LTC/USD levels of $150 and $200 until a few sessions. However, an abrupt emergence of volatile price movement will change the trading levels’ situation. Those points mentioned earlier could as well be regarded as range-bound zones with fewer amounts of variant candlesticks featured in it for now. The higher value’s line mentioned earlier seems to have the larger attention-calling as regard the next major movement in the crypto economy afterward.

On the downside, the LTC/USD market operation may witness a difficult trading moment, pushing northward further above the level at $200. There can be a fake breakout at the point to approach the next higher resistance zone around $240. In the event of that assumption forthcoming, a sell entry may exhume while a bearish candlestick forms on a full-fledged outlook around that line.

In comparison, the market situation reveals on the LTC/BTC price analysis chart that the base crypto struggles for recovery as paired with the counter crypto. In other words, the duo-currency market faces resistance at a lower trading line underneath the bigger SMA. The 14-day SMA indicator is under the 50-day SMA indicator. The Stochastic Oscillators are in the overbought region with conjoined lines, pointing toward the east direction. That indicates that an indecision trending situation could occur soon among the two crypto coins.